Selection of the best wineries in the Valdarno
You can taste Chianti, Chianti Aretino, Chianti Fiorentino, Valdarno di Sopra and IGT Toscana.
Visiting a winery and tasting its wine is an unforgettable experience 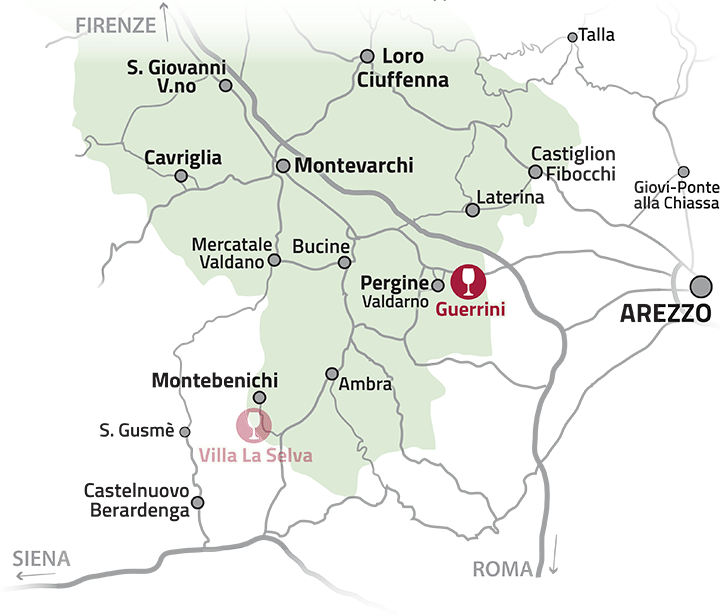 .The Wine Tasting in Valdarno begins with the DOC VALDARNO DI SOPRA which is also the youngest denomination of Controlled Origin regulated by modern regulations born in the 60s. Yet the production of high quality wines was so consolidated in these territories to be included in the ban of Cosimo III de’ Medici. He in 1716 felt the need to protect Tuscan wine products from Chianti, Pomino, Carmignano and Valdarno di Sopra, from counterfeits.

We are in the eastern and western slopes of the Val d’Arno between the plain of Arezzo and the Florentine hills. The climate is definitely favorable to the cultivation of the vine and the area is classified as intermediate according to the Rocchi scale. So it means that here negative climate complexes have weak intensity compared to positive climate characteristics.

The Apennine area of central Tuscany is located in the area of influence of the temperate and cold climate. But it suffers, especially in summer, the Mediterranean climate that conditions the final phase of the vegetative cycle in a decisive and positive way. Therefore, allowing to reach a complete and progressive maturation, without harmful peaks.

From the early 2000s, a large group of producers began to produce high quality wines, with Sangiovese.

The production area of DOC VALDARNO DI SOPRA includes the territory of the municipalities of Cavriglia. Then Montevarchi, Bucine, Pergine Valdarno, Civitella in Val di Chiana, Castelfranco-Piandiscò, Terranuova Bracciolini, Loro Ciuffenna, San Giovanni Valdarno, Castiglion Fibocchi and Laterina in the province of Arezzo, in the region of Tuscany. We are waiting for a Wine Tasting in Valdarno.

Chianti and Chianti Colli Aretini and IGT Toscano are also produced in the entire area highlighted by the map, in addition to Valdarno di sopra DOC